At Parker River Community Preschool our practice and curriculum is strongly influenced and guided by research in early childhood education and related fields. 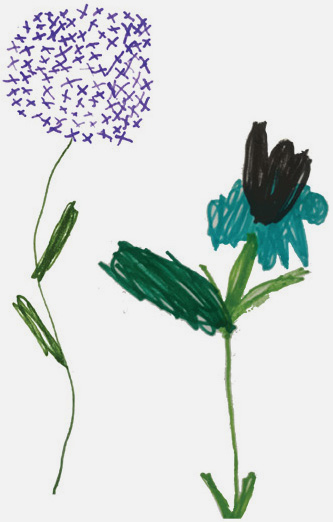 Learn about our guiding principles and inspiration:

The Schools of Reggio Emilia, Italy:

Reggio Emilia is a province in northern Italy. In 1991 the parent-founded preschools in Reggio Emilia became known around the world through a Newsweek article that hailed them as the best in the world. Supporters of these preschools believe that children are competent individuals and valuable members of the community. Curriculum in the Reggio Preschools is child-directed and purposeful. 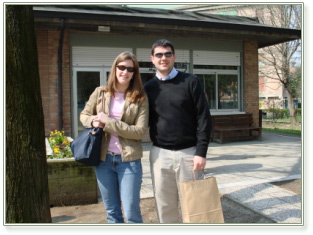 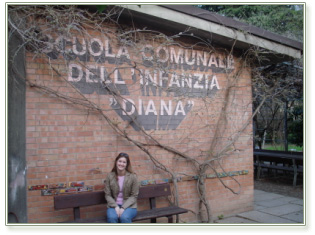 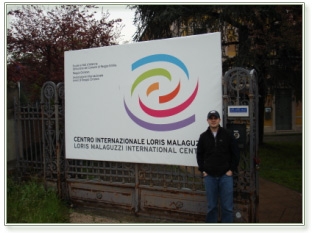 PRCP founders visit the schools of Reggio Emilia, Italy; with an international student group in March 2007

Dr. Howard Gardner, a psychologist and professor of neuroscience from Harvard University, developed the theory of Multiple Intelligences (MI) in 1983. The theory challenged traditional beliefs in the fields of education and cognitive science. Unlike the established understanding of intelligence — people are born with a uniform cognitive capacity that can be easily measured by short-answer tests — MI reconsiders our educational practice of the last century and provides an alternative.

According to Howard Gardner, human beings have nine different kinds of intelligence that reflect different ways of interacting with the world. Each person has a unique combination, or profile. Although we each have all nine intelligences, no two individuals have them in the same exact configuration — similar to our fingerprints.

For Gardner, intelligence is:

1. Linguistic Intelligence:
the capacity to use language to express what’s on your mind and to understand other people. Any kind of writer, orator, speaker, lawyer, or other person for whom language isan important stock in trade has great linguistic intelligence.

2. Logical/Mathematical Intelligence:
the capacity to understand the underlying principles of some kind of causal system, the way a scientist or a logician does; or to manipulate numbers, quantities, andoperations, the way a mathematician does.

3. Musical Rhythmic Intelligence:
the capacity to think in music; to be able to hear patterns, recognize them, and perhaps manipulate them. People who have strong musical intelligence don’t just remembermusic easily, they can’t get it out of their minds, it’s so omnipresent.

4. Bodily/Kinesthetic Intelligence:
the capacity to use your whole body or parts of your body (your hands, your fingers, your arms) to solve a problem, make something, or put on some kind of production. Themost evident examples are people in athletics or the performing arts, particularly dancing or acting.

5. Spatial Intelligence:
the ability to represent the spatial world internally in your mind — the way a sailor or airplane pilot navigates the large spatial world, or the way a chess player or sculptorrepresents a more circumscribed spatial world. Spatial intelligence can be used in the arts or in the sciences.

6. Naturalist Intelligence:
the ability to discriminate among living things (plants, animals) and sensitivity to other features of the natural world (clouds, rock configurations). This ability was clearly ofvalue in our evolutionary past as hunters, gatherers, and farmers; it continues to be central in such roles as botanist or chef.

8. Interpersonal Intelligence:
the ability to understand other people. It’s an ability we all need, but is especially important for teachers, clinicians, salespersons, or politicians — anybody who deals withother people.

9. Existential Intelligence:
the ability and proclivity to pose (and ponder) questions about life, death, and ultimate realities.

Play is simply shorthand for our capacity for curiosity, imagination, and fantasy — our creative dispositions. What makes play unique is that it enables us to create new learning experiences. To illustrate, an infant who drops a rattle from the crib, is learning about gravity. He or she is also creating a game with the parent who is retrieving the rattle. In addition, the infant learns that different objects make different sounds when they are dropped. Certainly children can learn these lessons from watching an adult perform the same actions, but it is much more powerful when the infant creates these experiences through his or her own actions. Learning by doing is always much more effective than learning by watching.

Perhaps the best example of how children learn from their self-created experiences is babbling. No one teaches the infant to babble, it comes entirely from the infant. In the process of vocalizing, the infant creates all of the sounds needed to speak any language on earth. As the infant listens to the language being spoken around him or her, the baby selects those vowels and consonants that are unique to the language of the parents. As toddlers, children often create their own grammars. So called “pivot” grammars are a case in point. That is the child uses a single word as the pivot of many different shorthand sentences, “Baby up,” “Baby drink,” “Baby down,” and so on. Language is a powerful example of the importance of children’s self-initiated play activities in their social learning. Play, however, is equally important in children’s learning of reading and math.

A project is an extended, in-depth investigation of a topic, ideally one worthy of the children’s attention and energy. In other words, projects involve children in conducting researchon phenomena and events worth learning about in their own environments.

In the process of these investigations children have opportunities to pose questions, to generate theories and predictions concerning possible answers, to seek answers to theirquestions (answers from which they are likely to generate still more questions), to interview experts and others from whom relevant information can be obtained, and to engage inother activities involved in collecting information.

Projects provide contexts in which children can apply a wide variety of social and intellectual skills in, addition to the basic academic skills being learned in the more formal parts ofthe curriculum. Thus, in this exhibit the efforts of very young children to write and to represent in other ways the data gathered during their investigations can be seen. In addition,projects provide contexts for young children to argue, cooperate, collaborate, share the responsibility of data gathering, check findings and many other research strategies. Projectsalso provoke children to in-depth probing into the nature of events and objects around them, to learning how things work and how they are made, to finding out who does whatand what tools are used, to discovering the sequences in which actions are taken in the events investigated, and to observing and describing the work done by people in their owneveryday worlds. Projects can also involve children in close examination of the natural world around them, help them learn what natural world objects consist of, and teach them toobserve closely how things grow and change over time.

Projects can be incorporated into the curriculum in any part of the world. Every environment and the people in it are potential sources of new and valuable information for youngchildren. The knowledge gained and the skills applied in investigating their own experiences supports children’s in-born dispositions to learn and investigate what is at hand.Furthermore, knowledge and skills of all kinds are strengthened, not only with instruction, but also through application and use of the kind of skills seen in these examples ofproject work.

It is useful to keep in mind that young children may come to their school experiences with different kinds and amounts of exposure to books and stories and encouragement to tryto read, to counting objects and using pencils, and so forth. However, all children come to school with lively minds marked by a powerful disposition to make the best sense theycan of their experiences. Projects provide rich contexts for expressing and strengthening that fundamental disposition.